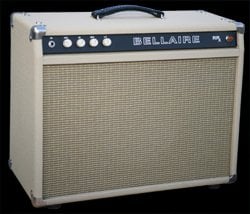 My favorite amp tech was Steve Dikun; I have been using him for two decades.

Like most amp people, he decided to build his own design of tube amp. Usually, that bores me, but his ideas were so good, I was on-board to contribute some ideas and the testing as it evolved. Steve's friend Rick Salazar, we tried all kinds of changes; tubes, rear baffle, speakers, gain, and range of controls.

Finally, the design I loved the most – called Bellaire – was done and I ordered and paid for mine.

I still have it and it records so well, and live it's really solid and clear onstage. It's VERY different from what other amp companies are making. It uses big KT66 tubes, which we discovered through restoring my old Marshall Plexi. Steve moved away, and these are rare to find, but maybe he'll still build you one!?