We sat for almost 2 hours, as he'd decided to finally make “another synthesizer.” He'd avoided the idea for ages, but felt it was a healthy market and he wanted to base it on the past Minimoog design, but with modern features.

We kicked around the cost/benefits of MIDI, presets, touchpad, tilting back, etc etc. I know of two other people consulted for the project, no one famous, just people Bob trusted. It took several years, and we showed empty prototype boxes at our NAMM Booth for a couple of years.

In 2002, finally, it was ready: he sent me the first working prototype and asked if I could fill it with 128 preset sounds... in TWO days! Nope. I'm not that fast or good. I promised I could do 64 sounds (half) which left a lot of “open” spaces for customers to add in their own sounds. The memory system was not working yet, so I drew old-style “patch diagrams” of each sound and recorded a little audio demo of each so they could compare their settings to mine. Back it went, and the little Voyager became a huge classic, outselling the original Minimoog. 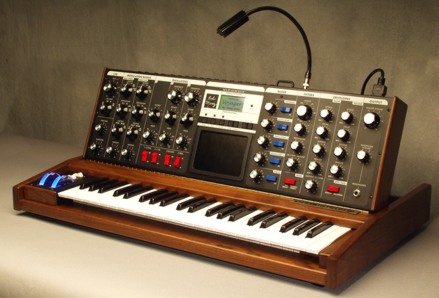 Once when working with Prince, they'd added a Voyager to the stage setup. He told the keyboard player to “thin it out a little; you have a REAL instrument here, not like these toys (Yamaha Motifs!) and it's eating up the whole mix!” I know Bob would have loved that comment!